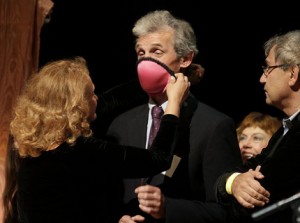 Dr. Elena Bodnar, left, winner of the Ig Nobel Public Health Prize straps a portion of a bra she designed that converts into a pair of gas masks to the face of Wolfgang Ketterle, 2001 winner of the Nobel Prize in Physics, at the Ig Nobel prize awards ceremony on the campus of Harvard University, in Cambridge, Mass., Thursday, Oct. 1, 2009. Bodnar, said that the bra/gas masks could have been useful during the Sept. 11 terrorist attacks. (AP Photo/Steven Senne)